After the successful partnership between Roxx and Pylon we are happy to be bringing you this very cool pressing of only 150 copies on black vinyl. Each copy is hand numbered and also comes with a limited edition 11” x 17” promotional poster of the brand new album from Pylon entitled ‘A Lament’, which was also just released in 2016 on Roxx Records / Quam Libet Records.

B3. The Curse of Eden

B4. South of Heaven

With 3 successful installments already released in the Underground Series, and the 4th one from Pylon set to be released, the success of the series has allowed for us to continue to grow and add to the series. Already released have been limited edition vinyl’s from, Wonrowe Vision (#1), Ultimatum (#2) and Oracle (#3). Series number 5 is also being pressed now and will be announced very, very soon!

For full information and purchasing information on the new Pylon vinyl visit www.roxxproductions.com

This 2016 Holiday season Roxx Records and Christian Metal Distro have teamed up again to bring you their 4th annual end of year ‘Best Of’ series. This year’s Best of 2016 CD, entitled ‘Following Yonder Star’, features cuts from all the Roxx Records titles released this year as well as some of our favorites and best sellers from our Christian Metal Distro site which features the best in Christian indie releases from 2016.

‘Following Yonder Star’  features cover art designed by our friends over at Frame Werks Graphics, and once again the CD is absolutely free as a part of our annual end of year Holiday sale, every order placed will receive a free copy. Check out this year’s track listing….

Philadelphia – Wasteland from the album ‘Warlord’

Ultimatum – Blood Covenant from the vinyl release ‘Into The Pit’

Malchus – But Deliver Us from the album ‘The Evil House’

Pylon – The Lone Rider from the album ‘A Lament’

Hero – Kill The Monster from the album ‘Miracles’

Oblivion Myth – Sea of Tranquility from the album ‘Inside The Mirror’

Stairway – Lucy Fuhr from the album ‘Power and Glory’

Thee Final Chaptre – The Key from the album ‘It Is Written’

Third Voice – Chosen from the album ‘A Day Like Today’ 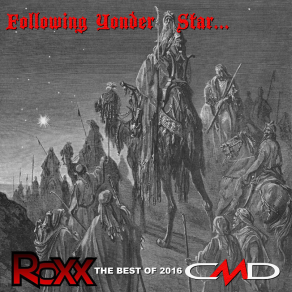 This year on Friday and Saturday only, not one site, but BOTH sites, will feature 50% off the ENTIRE store!  Vinyl quantities will be limited and we ask that EVERYONE be respectful in your purchasing efforts, in the past people have bought multiple copies for resale. This is NOT the intent of this sale, it is our one time annual offering for folks to pick up something for themselves they may not have been able to pick up or afford earlier in the year, or maybe to buy one for themselves and a gift for a friend. We just ask that everyone please be mindful of this very special sale and get in on it early. Large quantities of the same vinyl title may be refunded and we ask you to keep your orders at no more than 2 copies per person per title on our vinyl releases.

The sale will begin Friday morning, right after Thanksgiving day, starting at 12:01 am EST and both stores will run the 50% off sale when you use code ROXX2016 at the end of your purchase. The sale will run for 48 hours ending Saturday night at 11:59pm EST.

Visit www.roxxrecords.storenvy.com or www.christianmetaldistro.com to begin and Happy Holidays to each and every one of you from Roxx Productions.