Thrash metal outfit Deliverance drop their first new single in nearly five years entitled ‘The Black Hand’ check out the new lyric video courtesy of Lux Studios below and be sure to request the new single on all your favorite rock radio stations today!
Support the Metal Underground!
https://www.youtube.com/watch?v=zqxBqHt-jg4
Watch for the brand new album ‘The Subversive Kind’ coming in early 2018
on Roxx Records / 3 Frogz Records.
Visit http://www.roxxproductions.com to join their email list. 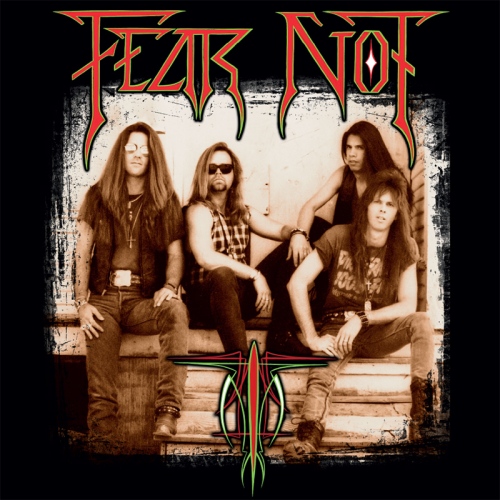 Roxx Records is very excited to announce our next Limited Edition reissue of the much sought after debut release from US rockers FEAR NOT!

That’s right one of the long, lost out of print titles that has never seen a proper reissue. Original CD copies are very scarce to find these days, if you can find one at all! But even better this will be the first time EVER that this title has ever been released on vinyl!

Fear Not the self-titled album will be issued on vinyl with a special run of only 300 copies, featuring 100 copies on purple vinyl and 200 on black vinyl. It will feature all 10 of the original tracks as they originally appeared on the CD. Act fast these wont last long!

Also we will be pressing 500 copies on limited edition CD featuring all 10 original tracks and 2 brand new previously unreleased tracks on CD! All pre orders will come with a very special limited edition 11”x 17” folded poster. Only orders placed before the release date will get this special poster which features the recently updated hand painted cross artwork you will see on the back cover.

Release date is scheduled for December 15, 2017, just in time for the Holiday season and pre orders are live now! Get your copies reserved today!

Stay tuned for updates and pre-order information by signing up on our email list at http://www.roxxproductions.com

Ransom burst on to the Christian music scene in 1990 featuring the fiery female fronted vocals of Lisa Faxon, the amazing guitar work of Tony Ortiz and the beautiful bass sounds of Michael Preciado as the core members of Ransom. In a male dominated world of hard rock and metal bands, Lisa would rise above bringing the polished vocal sounds of Ransom to the forefront of the Christian rock world throughout the early 90’s.

Releasing their self-titled debut album in 1991 on Intense Records the band was ready to take the Christian rock world by storm. Hot on the heels of this critically acclaimed release the band began working immediately on their sophomore follow up release. In 1992 the band would release ‘Soul Asylum’ again receiving accolades and critical acclaim throughout the industry. Alas the turn of the hard rock and metal community was upon them with grunge starting to overturn the hard rock world in the early 90’s and this would ultimately be the final release from Ransom.

Soul Asylum was a masterpiece of an album being produced by Lanny Cordola , who also played on several tracks and handled some of the writing duties, as well as a very special guest appearance from Oz Fox of Stryper. The original pressing of this album has been long out of print and tough to find for fans. Copies of the original CD are scarce and the album is definitely in need of a remaster to bring it up to today’s standards and volume levels.

This year marks the 25th anniversary of Soul Asylum and Roxx Records is set to help breath some new life in to this very special hard rock release. Soul Asylum has been completely remastered by Rob Colwell (Bombworks) and the artwork and layout has been updated and refined by Scott Waters (No Life Til Metal)

This very special remaster will be extremely limited to only 300 pieces on CD format only. Each CD will come with a special hand numbered CD insert, packaged in a jewel case with an 8 page booklet with lyrics and some special liner notes from Ransom bassist Michael Preciado. Lower numbers will be issued based on time of purchase and pre orders are available now. As this is a truly small run of CD’s it will ONLY be available through Roxx Records direct outlets and a very small handful of retail partners depending on remaining quantities after presale. Pre orders are up and live now.

Please visit http://www.roxxproductions.com to sign up on our email list to be the first to hear of all our pre orders and special releases.

Roxx Records is very excited to announce a multi album release project where we will be reissuing some very cool Limited Edition releases from the catalog of classic Christian rockers PHILADELPHIA !!!!

2018 will see several very cool pieces come back to life featuring all new remasters and revised artwork on vinyl and CD of the classic second album from Philadelphia entitled Search and Destroy as well as a a very special pressing on vinyl of the bands most recent album Warlord !

Search and Destroy was originally released in 1985 on vinyl and tape only, and eventually on CD for the first time in 2000 with a Limited Edition pressing on M8 records. Those original tracks will be remastered from the original source and reissued on a limited edition full vinyl pressing of 500 pieces along with a special remastered CD edition of only 500 pieces, containing all of the original tracks just as they appeared in 1985.

Roxx is going to do something very special with the cover art for Search and Destroy as we are going to recruit all of you artists out there to assist us with this one. We want YOU to take that original album cover which we have stripped down to bare bones and color it and add to it and bring new life in to that original artwork! The band and the label will judge all of the entries and select a winner. The winner will be given a VERY nice vinyl and cd special prize package that you will not be disappointed with.

Those wanting to enter the contest must email bill@roxxproductions.com to receive the file and begin working on it. This contest will run until December 15, 2017 and the winning entry will be announced before year end as we start to work on the packages for a 2018 release date.

If that is not enough for you we will also be pressing a special run of only 150 copies of the latest album Warlord on vinyl as a part of the Roxx Records hand numbered Underground Series. This will be a very limited run also coming out in 2018 you won’t want to miss out on this one either!

So stay tuned into 2018 as we celebrate Philadelphia and revisit the music and legacy of a band that would make an incredible impact on the Christian music world!
Be sure and sign up on our email list to stay up to date on all the releases and pre order information first by visiting http://www.roxxproductions.com